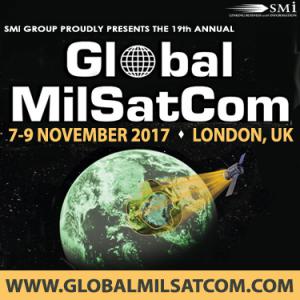 Europe’s leading event for defence and military satellite professionals will take place on 7-9 November at the Park Plaza Riverbank Hotel in London.

Military attendees are at an all-time high, with nearly 150 representatives from a global audience of armed forces.

Featuring the show’s best-to-date agenda, the three-day conference will provide delegates with over 40 presentations from leading commercial players as well as military and government personnel. An expert speaker list of over 50 industry movers and shakers will host exclusive presentations on core developing themes for MilSatCom this year, including GovSatCom, Wideband AoA, and ground segment innovations.

“This year’s programme is inarguably the best and most international in the event’s history,” SMi Managing Director Dale Butler said. “Delegate numbers are up by 30% and the event is looking to attract around 500 attendees this year, which will be a new record for the conference series.”

Described as “the best networking event” by its audience, delegates will also have the opportunity to meet and network with the Who’s Who of the global milsatcom landscape through dedicated networking sessions hosted by SES, Airbus, Lockheed Martin and Eutelsat.

The full roster of speakers and presentations can be found on www.globalmilsatcom.com/ein.

For those interested to attend, there is still a limited number of spaces left. Registration information can be found on the website.

Established since 1993, the SMi Group is a global event-production company that specializes in Business-to-Business Conferences, Workshops, Masterclasses and online Communities. We create and deliver events in the Defence, Security, Energy, Utilities, Finance and Pharmaceutical industries. We pride ourselves on having access to the world’s most forward thinking opinion leaders and visionaries, allowing us to bring our communities together to Learn, Engage, Share and Network. More information can be found at http://www.smi-online.co.uk