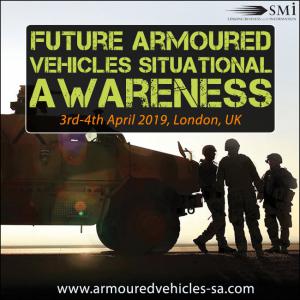 Future land forces must prepare for high intensity conflict, where information superiority and surveillance capabilities may be challenged by an innovative enemy.

To maintain a competitive edge, it is imperative for the armed forces to intimately understand the capabilities available, to enhance both combat effectiveness and survivability of the vehicle.

Mr Alex Koers, Cofounder and Director at Microflown AVISA will be presenting on ‘Castle: The State of the Art Acoustic Subarray’. Topics to be discussed include:
• Acoustic localization of gunshots
• Sound ranging
• Tracking ground vehicles
• Fire control

Mr Phil Froom, Business Development Lead for Navigation Systems Europe Middle East and Africa at Collins Aerospace Mission Systems will be presenting on ‘The Role of Satellite Navigation in Future Armoured Vehicle Situational Awareness’. Topics to be discussed include:
• Satellite-based navigation. Still a critical part of military platform Situational Awareness
• A look at the developments in Satellite-based navigation
• How to best address these, ensuring low risk and high availability?
• Threats, cost-effective mitigation, future proofing, and options

Ms Helena Bishop, Human Centred Design, Certified Professional for User Experience, CPUX at BAE Systems will be presenting on ‘Benefits of Ergonomics and Human Centred Design’. Topics to be discussed include:
• User Interface Design and how through our HCD process, we capture user engagement
• Four key steps: illustrating how an inexpensive and controlled approach can be invaluable to projects – even before they start to build a device / product
• Case study: Adaptable Tactical Information Exploitation (ATIX) Prototype

The event brochure with the full two-day programme and speaker line up is available to download on the website at http://www.armouredvehicles-sa.com/einpress

Just three weeks remain until the only conference of its kind exclusively dedicated to armoured vehicle situational awareness, delegates are advised to register soon at http://www.armouredvehicles-sa.com/einpress

For sponsorship and exhibitor enquiries, contact Justin Predescu on +44 (0) 207 827 6130 or email jpredescu@smi-online.co.uk

About SMi Group: Established since 1993, the SMi Group is a global event-production company that specializes in Business-to-Business Conferences, Workshops, Masterclasses and online Communities. We create and deliver events in the Defence, Security, Energy, Utilities, Finance and Pharmaceutical industries. We pride ourselves on having access to the world’s most forward thinking opinion leaders and visionaries, allowing us to bring our communities together to Learn, Engage, Share and Network. More information can be found at http://www.smi-online.co.uk