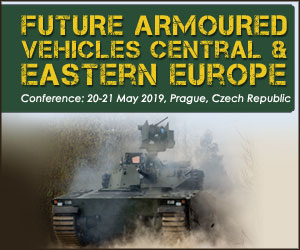 Conference delegates will have the opportunity to view the latest combat vehicle survivability, C4I and weapons systems technology in the exhibition hall during the two-day event.
SMi Group are pleased to announce that Collins Aerospace and Patria have recently confirmed to exhibit at the two-day conference:

Collins Aerospace, a unit of United Technologies Corporation (NYSE: UTX), is a leader in technologically advanced and intelligent solutions for the global aerospace and defense industry. Created in 2018 by bringing together UTC Aerospace Systems and Rockwell Collins, Collins Aerospace has the capabilities, comprehensive portfolio and expertise to solve customers’ toughest challenges and to meet the demands of a rapidly evolving global market. We employ more than 70,000 people in nearly 300 locations worldwide.

For those interested in attending, there is a £100 Early Bird discount on bookings expiring on Friday 29th March 2019. Places can be reserved at http://www.futurearmouredvehicles.com/einpress

With 25+ expert presenters and 100+ military, government and industry attendees expected, this year’s conference will explore the ongoing requirement for the Czech Armed Forces 210 new infantry fighting vehicles for this year and will be an unmissable event for anyone in the armoured vehicle domain.

The event brochure with the full two-day agenda and speaker line up at http://www.futurearmouredvehicles.com/einpress

About SMi Group: Established since 1993, SMi Group is a global event-production company that specializes in Business-to-Business Conferences, Workshops, Masterclasses and online Communities. We create and deliver events in the Defence, Security, Energy, Utilities, Finance and Pharmaceutical industries. We pride ourselves on having access to the world's most forward-thinking opinion leaders and visionaries, allowing us to bring our communities together to Learn, Engage, Share and Network. More information can be found at http://www.smi-online.co.uk