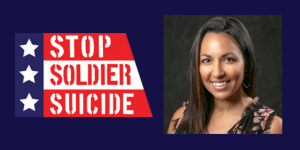 Tina’s deep experience in the non-profit sector brings a new mindset to how to we approach marketing and revenue growth.”
— Chris Ford, CEO

Starkey joins Stop Soldier Suicide with 15 years’ experience leading marketing and development teams for the American Cancer Society, the global leader in the fight against cancer. “It’s an absolute honor to join this team of leaders in the mission to save service member and veteran lives from suicide,” says Starkey. “There is no organization better positioned and more strategically focused on bringing military suicide rates to parity with the national average. I am truly inspired by this mission and believe there is no greater way to give back to those who serve our country than to dedicate my skills to help solve this problem.”

During her 15-year career with the American Cancer Society, Starkey held roles in community development, training, digital revenue, and integrated marketing. Most recently, she led an overhaul of the social marketing strategy and developed a modern approach to influencer marketing and social care. In her tenure, she and her teams raised over $50 million in digital revenue for the organization.

"Tina’s deep experience in the non-profit sector brings a new mindset to how to we approach marketing and revenue growth," said Chris Ford, Stop Soldier Suicide’s chief executive officer. "While we know the support we provide for at-risk service members and veterans is world-class, we also know we need to reach more people faster to crush this problem. Tina is a welcomed asset to help us accelerate our efforts to fund the work and find those most in need.”