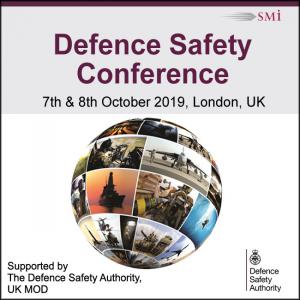 SMi Group Reports: The Defence Safety Conference will convene this October in London, with 250 attendees expected.

LONDON, UNITED KINGDOM, July 8, 2019 /EINPresswire.com/ — Following the success of the inaugural conference in October 2018, SMi Group are delighted to announce that the 2nd annual Defence Safety Conference will take place on 7th and 8th October 2019 at the Copthorne Tara Hotel, London.

Returning as the only conference exclusively dedicated to Defence Safety and supported by the UK MoD’s Defence Safety Authority (DSA), the event will bring together over 250 attendees from around the world to review the safe delivery of defence capabilities.

The full programme will also cover maritime and air safety and can be downloaded from: http://www.defencesafety.com/einpr

Supported by senior leaders across international armed forces and C-Level industry executives, this unmissable event will be the global meeting point for the military community.

For those interested in attending the Defence Safety Conference, registrations can be made on the event website at http://www.defencesafety.com/einpr

For commercial organisations that wish to sponsor, speak and attend the conference, contact Sadia Malick on +44 (0) 207 827 6748 or smalick@smi-online.co.uk

About SMi Group: Established since 1993, SMi Group is a global event-production company that specializes in Business-to-Business Conferences, Workshops, Masterclasses and online Communities. We create and deliver events in the Defence, Security, Energy, Utilities, Finance and Pharmaceutical industries. We pride ourselves on having access to the world's most forward-thinking opinion leaders and visionaries, allowing us to bring our communities together to Learn, Engage, Share and Network. More information can be found at http://www.smi-online.co.uk