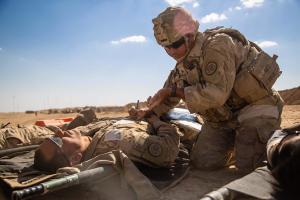 WASHINGTON, DC, USA, October 8, 2019 /EINPresswire.com/ — The American Mideast Coalition for Democracy stands by the free Syria Democratic Forces (SDF) including Kurds, Arabs and Christians in Northeast Syria, who have been resisting the ISIS Caliphate onslaught for years and have been a strong ally on the ground for the international coalition. AMCD applauds the US backing of the free SDF over many years and we wish this partnership to continue in some form until the final resolution of the Syrian conflict.

“I worry about Muslim Brotherhood militias who could take advantage of any new security plans imposed on Northern Syria,” said AMCD co-chair, Tom Harb. “These Ikhwan militias have taken part in ethnic cleansing in Afrin and have close relations with the ISIS jihadists. The Christians in Syria are extremely concerned about this possibility.”

"We are also concerned about the transfer of thousands of ISIS prisoners now in SDF detention camps to the Ikhwan militias,” added AMCD co-chair, John Hajjar. “We believe that these terrorists could be released to spread throughout the Arab world, Europe, and eventually, the US. Erdogan cannot be trusted as he has used the refugee issue to wreak havoc in Europe and to spread Islamists far and wide.”

“It is also possible that Iranian controlled Shi’a militias will advance to seize territory from SDF,” said AMCD vice-chair, Hossein Khorram. “Therefore, we urge the Trump Administration to maintain its support for the northeast free Syria and the SDF.”

We call on President Trump, whose support to the minorities has been clear since the campaign in 2016, to initiate tri-lateral talks between Turkey and the Kurds under US mediation, to resolve their conflict peacefully.

Furthermore, we support a plan by AMCD senior advisor, Dr Walid Phares, and offered to the NSC in January, calling for a multinational peace force to separate the Turkish and Kurdish forces along the border, thus ensuring security for both sides.