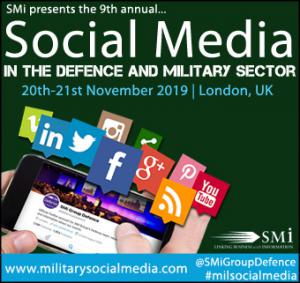 9th Annual Social Media in the Defence and Military Sector

LONDON, LONDON BRIDGE, UNITED KINGDOM, October 22, 2019 /EINPresswire.com/ — As Social Media has become a crucial tool for the Armed Forces in the 21st century, and can be used as a platform to reach out to a global audience, SMi’s 9th annual Social Media in the Defence and Military Sector conference, will take place in London on the 20th and 21st November 2019.

SMi are pleased to announce two brand new speakers have been added to the agenda including:
Rachael Clamp, Leadership Team, Women in Defence UK who will present: Women in Defence UK: Strategically Growing and Engaging; and Colonel Christopher MacGregor, Assistant Head, Army Media & Communications, British Army who will present: Fighting with Facts – The British Army.

To download the conference agenda, exclusive speaker interviews, past attendee lists and much more visit: www.militarysocialmedia.com/einpr8

The two-day event aims to aid delegates in developing their social media strategies by looking at the ways in which nations and key industry players are using social media, as digital communications becomes essential to the perception of military and defence activities globally.

• Exclusive Industry Perspectives- Lamberto Martinello, Communication Campaigns, Leonardo will discuss the impact of social media to support regional campaigns plus many others!

• Effective Audience Engagement- Content creation is important, but how do experts effectively engage their audience? Learn more from the Brazilian Army, the Bundeswehr and i3 Gen on all things AI, Chatbots, You Tube and much more!

• Two Pre-Conference Workshops– Audience Engagement through Virtual Reality (VR) and Augmented Reality (AR) & Digital Transformation in Government Communications. The first of which will be led expertly by a strategic expert with experience serving in the Irish Armed Forces and now VRAI. SMi’s second workshop will be hosted by the former Head of Communications Services, NATO Headquarters

To register for the conference and/or workshops, secure your place at www.militarysocialmedia.com/einpr8

If you would like to showcase your solutions to key decision makers within the industry, contact Sadia Malick on +44 (0) 207 827 6748 or smalick@smi-online.co.uk