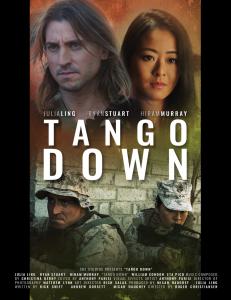 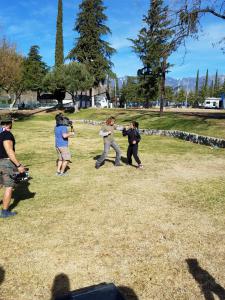 Behind the Scenes of Tango Down – Photo by Van Booth

Produced by Silver Rose Entertainment and written by USMC Veterans, the film will launch with a live streamed premiere at 10pm Eastern on November 8th, 2019.

We try to employ veterans in everything we do. We invite them to be a part of the cast and crew, so that they can tell stories and make movies, and hopefully heal through the arts.”
— Julia Ling

VIDI.SPACE will release the film this Friday. The launch will include a live streaming event at 7pm Pacific / 10pm Eastern. The live streaming premiere allows fans to watch the film with cast and crew and engage them via a chat room that will be available concurrent with the film. VIDI.SPACE has worldwide rights to distribute “Tango Down,” which will be available for rental, purchase, or Video on Demand to VIDI.SPACE subscribers. It will also be on Amazon Prime under the VIDI.SPACE channel.

“I’m excited to work with VIDI.SPACE to distribute Tango Down,” says Micah Haughey. “Elizabeth truly cares about the filmmakers and understands the importance of providing a user-friendly digital streaming experience.” On VIDI.SPACE, “Tango Down” will include extra features such as behind-the-scenes videos, deleted scenes and more. “The online platform they’ve created acts as a digital Blu-Ray, allowing us to include extra videos, photos, audio, or whatever else we want,” Micah added.

“Tango Down” is directed by Roger S. Christiansen, whose credits include Friends, Hannah Montana, and iCarly. Julia Ling (Chuck, Studio 60) and Ryan Stuart (Game of Thrones, Guardians of the Galaxy) star as two fiercely loyal Marines who must reconcile their new distrust of each other after a botched mission in Afghanistan comes back to haunt them years after they’ve returned to civilian life.

The mission of Veteran Powered Films is to help fight suicide, anxiety, and other issues that veterans face – through filmmaking. “We try to employ veterans in everything we do. We invite them to be a part of the cast and crew, so that they can tell stories and make movies, and hopefully heal through the arts. Through this process, we are creating a community where veterans can come together and connect with like-minded folks, and inspire each other,” said Julia Ling.

Simultaneously, these veterans get to work alongside civilians in a professional setting, which the team believes is vital to helping to prevent veteran suicide. “There seems to be a disconnect between civilian and veteran. Civilians don’t understand veterans, and veterans don’t feel they belong in the civilian world, so some veterans start to isolate themselves, which can lead to the problems of depression, or worse,” says Julia. Through Veteran Powered Films, the team hopes to bridge that gap between civilian and veteran.

VIDI.SPACE founder and CEO Elizabeth Saint created the platform specifically with independent filmmakers in mind. There is a VIDI.SPACE app available for iOS, Android, Apple TV, Roku, and Amazon Fire.