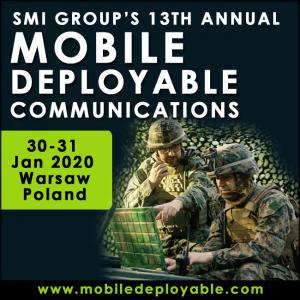 SMi Reports: A series of NATO focused presentations will be featured at the Mobile Deployable Communications Conference in Warsaw, Poland in January 2020.

WARSAW, POLAND, November 11, 2019 /EINPresswire.com/ — Next spring, the US Army will be deploying 20,000 soldiers to Europe, where they will be taking part in the huge Defender-Europe 20 exercise alongside 17,000 allied troops.

Defender 20 is just the latest in a series of multinational exercises in Europe over the past year, demonstrating the importance of allied interoperability and creating a unified Europe.

For this reason, SMi Group are delighted to announce the following NATO focused presentations at this year’s Mobile Deployable Communications Conference:

The full agenda and speaker line up can be viewed at: www.mobiledeployable.com/EINPR5

As the only conference addressing CIS in the Eastern European operational environment, Mobile Deployable Communications is a key event where delegates can explore future requirements for equipment and procurement processes, as well as network with senior military leaders. The event will be held in Warsaw, Poland on the 30th – 31st January 2020.

There will also be a pre-conference workshop hosted by Colonel (Ret’d) Ralph Thiele, Director, Stratbyrd Consulting, on “The Challenge of Electromagnetic Disruption” held on January 29th 2020.

Those interested in attending are encouraged to secure their spot soon at: www.mobiledeployable.com/EINPR5

About SMi Group: Established since 1993, the SMi Group is a global event-production company that specializes in Business-to-Business Conferences, Workshops, Masterclasses and online Communities. We create and deliver events in the Defence, Security, Energy, Utilities, Finance and Pharmaceutical industries. We pride ourselves on having access to the world’s most forward-thinking opinion leaders and visionaries, allowing us to bring our communities together to Learn, Engage, Share and Network. More information can be found at http://www.smi-online.co.uk