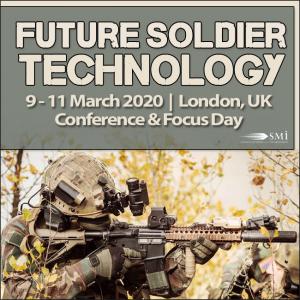 With the UK currently in the process of designing its new TommyWorks initiative in a bid to drive soldier modernisation, SMi Group are delighted to announce the following presentations at 2020’s Future Soldier Technology Conference and Focus Day:

“R&D Into Dismounted Situational Awareness”
• Methods and approach to developing DSA technology for the dismounted soldier
• The development of DSA, for a soldier system, within LE Tac CIS
• Wider situational awareness and Combat identification for the general user
Presented by Lieutenant Colonel Toby Lyle, SO1 Command and Battlespace Management, British Army

The full agenda and speaker line-up can be viewed online at: www.futuresoldiertechnology.com/EINpr3

The conference and focus day will also include exclusive presentations from:

Along with more briefings on future soldier programmes from across the globe:

For those interested in attending, there is an early bird offer on the conference with a £400 saving for bookings made by 29th November: www.futuresoldiertechnology.com/EINpr3

About SMi Group:
Established since 1993, the SMi Group is a global event-production company that specializes in Business-to-Business Conferences, Workshops, Masterclasses and online Communities. We create and deliver events in the Defence, Security, Energy, Utilities, Finance and Pharmaceutical industries. We pride ourselves on having access to the world’s most forward-thinking opinion leaders and visionaries, allowing us to bring our communities together to Learn, Engage, Share and Network. More information can be found at http://www.smi-online.co.uk