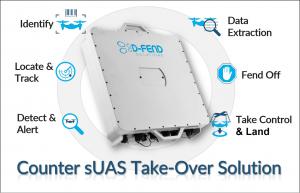 The DIU supported a number of Department of Defense (DOD) customers in evaluating component technology during Black Dart 2019. From a field of sixteen companies, EnforceAir was selected as a best-in-its-class RF system for follow-on integration and operational assessment. DIU further evaluated EnforceAir’s ability to integrate into a system of systems at a government test facility during a Counter Drone event this past November, with lessons learned informing the Department’s approach to integration of capability.

EnforceAir c-UAS is an advanced autonomous system that automatically and passively detects, locates and identifies rogue drones as well as mitigates risk by taking control over (takeover) them and landing them safely at a predefined safe zone, applying a non-jamming & non-kinetic technology which does not require line-of-sight, making it ideal for all complex environment, whether urban or rural.

The EnforceAir was rapidly co-developed with the US Assistant Secretary of Defense Special Operations/Low-Intensity Conflict (ASD SO/LIC) Combating Terrorism Technical Support Office (CTTSO) to support DoD and shared with US Law Enforcement Agencies. In 2019, EnforceAir has been successfully trained & deployed by more than twenty U.S DOD, DHS, and DOJ units and agencies, helping to enhance US national security against hostile commercial drones. Among the agencies currently operating D-Fend's EnforceAir are the U.S. Special Operations Forces, U.S. Army, FBI, U.S. Customs and Borders Patrol.

Counter Drone test and evaluation events are designed to comprehensively assess c-UAS technologies, and to drive forward the DoD’s understanding of the complexity of designing, developing and fielding integrated system of systems for the c-UAS problem set.

“Being selected as the best RF solution by the DOD is a remarkable achievement for D-Fend” said Zohar Halachmi, Chairman & CEO of D-Fend. “We are proud to be a unique and essential part of a mission critical solution that protects U.S. assets, troops and citizens.”

“D-Fend’s EnforceAir continues to demonstrate outstanding capabilities, surpassing all other c-UAS solutions.” said Greg Gudger, President & CEO of ELTA North America, the exclusive marketer of D-Fend Solutions in the U.S. “We are honored to officially represent D-Fend in the US and support the DOD’s efforts.”

About D-Fend Solutions:
Founded in 2017 by Zohar Halachmi, Assaf Monsa and Yaniv Benbenisti, D-Fend Solutions is the leading provider of counter-drone solutions for urban environments in the most challenging scenarios. The company has recently secured a $28M funding led by Claridge Israel with participation by current shareholder, Vertex Israel. For further information, visit www.d-fendsolutions.com

About DIU:
Defense Innovation Unit (DIU) accelerates the adoption of commercial technology and methodologies into the U.S. military to strengthen our nation's security. With offices in Silicon Valley, Boston, Austin, and the Pentagon, DIU connects the Department of Defense customers with leading technology companies to prototype and transition of commercial solutions into the field within 12 to 24 months. Learn more at www.diu.mil.

About CTTSO:
The Assistant Secretary of Defense for Special Operations/Low-Intensity Conflict (ASD (SO/LIC)) established CTTSO in 1999 to consolidate its research and development programs previously administered by the Office of the Assistant Secretary of Defense (Command, Control, Communications, and Intelligence). The research and development effort that supports the interagency Technical Support Working Group (TSWG) was the first program to transition to CTTSO. The TSWG is divided into 10 subgroups, each chaired by senior representatives from federal agencies with special expertise in those functional areas. The Explosive Ordnance Disposal/Low-Intensity Conflict (EOD/LIC) Program, which develops advanced technologies for Joint Service EOD and Special Operations Forces (SOF) missions, transitioned in 2001. In 2007, the Irregular Warfare Support (IWS) Program was initiated to satisfy a growing need to improve the capacity of the United States to counter insurgencies and fight an irregular war. In FY16, portions of the EOD/LIC and IWS Programs that support the CTTSO mission were transitioned to TSWG under the Improvised Device Defeat/Explosives Countermeasures and Irregular Warfare and Evolving Threats, respectively.
For further information, visit https://www.tswg.gov/AboutCTTSO.html