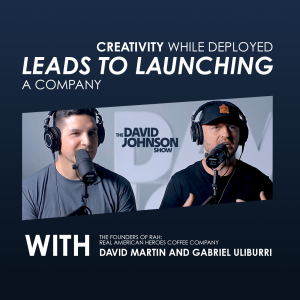 We wanted to create a brand around our passion for coffee and find a way to highlight these real American heroes and the service they do daily…"”
— David Martin, co-founder of RAH Coffee Co

PHOENIX, AZ, USA, September 10, 2020 /EINPresswire.com/ — On the new episode of “The David Johnson Show”, a national voice that talks about points of interest within the post 9/11 military and veteran culture, David speaks with Gabriel Uliburri and David Martin, aka Gabe and David, the founders of RAH, Real American Heroes Coffee Company.

Real American Heroes (RAH) Coffee Company launched in December 2018 and has grown since and partnered with the largest coffee roaster in Arizona to offer seven delicious coffee blends, using only premium beans found all over the world.

“Our goal is to share our military experiences, discipline, and drive to create a respectable brand that provides our customers with great tasting coffee blends, apparel, and the honor of being part of an amazing culture and a brand that recognizes the Everyday hero,” remarked Gabriel.

Their friend Todd Martin handles the financial side of the business, Gabe runs marketing and social media, and David is in charge of operations. Their skill sets came together when they were serving as U.S. Air Force Reservists in Phoenix, Arizona. They were deployed to Kuwait in early 2018. During that year, the three of them manned weapon systems as combat convoy gunners while defending off IED’s, small arms fire, and Vehicle Borne IED’s. They saved the lives of lost hikers in the forest as Search & Rescue members, drove in the President’s motorcade, responded to worldwide humanitarian disasters, fought raging house fires, responded to downed military aircraft, and volunteered at homeless shelters on Christmas in Korea and in Japan.

In their military service downtime, they would often discuss their entrepreneurial dreams over cups of coffee. Coffee was their story time and time to reflect on important things, that’s when RAH Coffee Co. was born.

David says “We wanted to create a brand around our passion for coffee and find a way to highlight these real American heroes and the service they do daily, the actions they did to save another, or months they spent in a war zone away from their families.”

Watch their interview at https://thedavidjohnsonshow.com/video/ or on The David Johnson Show on YouTube: https://youtu.be/2WC0aybo3vI

“The David Johnson Show” is a national voice that talks about points of interest in the American military and veteran subculture. Each show episode showcases a different guest with a different story. Sign up to get notified of new episodes at https://thedavidjohnsonshow.com.