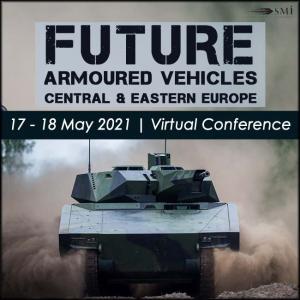 SMi reports: Registration is now open for Future Armoured Vehicles Central & Eastern Europe, which will take place as a virtual event on 17th – 18th May 2021.

As Central and Eastern Europe’s most focused armoured vehicles meeting, attendees will hear presentations from senior military representatives from the CEE region, including the Czech Republic, Austria, Poland, Lithuania, Estonia, Croatia and Slovenia, as they outline their current armoured vehicle capability requirements, modernisation and procurement programmes.

Not only this, but delegates will also have the opportunity to hear strategies on harnessing interoperability amongst CEE nations, hear insights on the latest products and technologies from OEMs and technical experts, and network virtually with leading representatives from military and industry.

Interested parties can register for the event at http://www.futurearmouredvehicles.com/EINpr1. Attendance is FREE for military and government personnel, and just £699 for commercial attendees.

About SMi Group:
Established since 1993, the SMi Group is a global event-production company that specializes in Business-to-Business Conferences, Workshops, Masterclasses and online Communities. We create and deliver events in the Defence, Security, Energy, Utilities, Finance and Pharmaceutical industries. We pride ourselves on having access to the world's most forward-thinking opinion leaders and visionaries, allowing us to bring our communities together to Learn, Engage, Share and Network. More information can be found at http://www.smi-online.co.uk