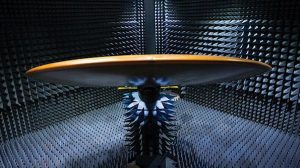 KAPOLEI, HAWAII, USA, January 12, 2021 /EINPresswire.com/ — North Star Scientific Corporation (NSS) of Kapolei, Hawaii was recently awarded a $13.5 million contract by the U.S. Navy to continue development of its High Gain UHF Electronically Scanned Antenna (UESA) radar antenna system. After recently completing a contract to mature the UHF design while testing the multi-band elements of its system, Dr. James Stamm, founder and CEO of NSS, says this next step will complete the design and testing of its integrated radar transceiver assembly.

NSS’s multi-band electronically scanned antenna solves the deficiencies of mechanically scanned antennas, delivering the ability to track and scan multiple targets simultaneously and enabling other concurrent operating modes. “North Star Scientific's antenna is completely different from the antenna used on today's airborne early warning aircraft such as the Navy’s E-2D Advanced Hawkeye and the USAF and NATO AWACS aircraft,” said Stamm. Those aircraft have antennae that rotate mechanically and have limited ability to scan while tracking a target. The NSS antenna scans electronically, providing complete agility to the radar, thereby reducing the need to have multiple surveillance aircraft in the air simultaneously. NSS claims a dual-band radar is critical to countering known and emerging threats.

After completing design of the Radar Transmitter Assembly under this new contract, NSS hopes to begin conducting system level testing, planned to take place at the Pacific Missile Range Facility (PMRF) in Kauai. While NSS is responsible for overall design and system manufacturing, the company is proud of the highly specialized and unrivaled team of sub-contractors it has developed to support a capability that will be key to the security of U.S. Forces and territory.

About North Star Scientific: NSS is a privately owned defense electronics business based in the state of Hawaii in Kapolei, Oahu. The company boasts a team of scientists and engineers with a deep well of expertise and record of success bringing innovative and highly reliable solutions to its DoD customers.