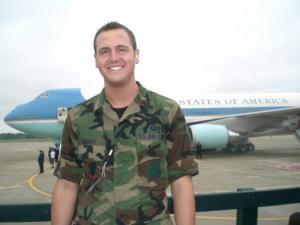 The podcast interview is for Veterans, from a Veteran, who have experienced transformative near-death experiences.

For many years, I lived in fear that people would judge me based on my NDE and it’s time I use my experience to assist others who are going through what I went through.”
— Chase Skylar DeMayo

Chase Skylar DeMayo is a US Air Force Veteran who died in 2008 but was sent back to earth to spread light, love, joy, and laughter throughout the world. Initially, Chase kept his near-death experience (NDE) private for twelve years, fearing judgement and retribution. In October 2020, however, Chase attended a Veteran’s Mental Health Retreat which reopened his NDE and created a newfound passion for helping fellow Veterans and their supporters.

Recently, Chase conducted his first public interview with Lee Witting, the host of NDE Radio. This interview was set up to help educate Veterans, especially those who have experienced transformative near-death experience to “Chase the Light” and to provide public education about the lack of accessible care for wounded soldiers and Veterans.

“I couldn’t be more pleased to share my experience with Lee Witting on his recent podcast,” says Chase. “For many years, I lived in fear that people would judge me based on my NDE and it’s time I use my experience to assist others who are going through what I went through. It’s now my goal to help heal others and allow them to ‘Chase the Light’ and get the support they so desperately need and deserve.”

Through his work, Chase works closely with IANDS, the International Association for Near Death Studies, and Corcoran Consulting, organizations which provide public education and awareness about Veterans and their near-death experiences, in addition to one-on-one support.

Born in Orlando, Florida, Chase Skylar DeMayo was raised alongside his six adopted siblings by his grandparents, where he discovered what love, acceptance, and family truly means. After being injured early in Survival Training in the Air Force and experiencing a near-death experience while stationed at Langley Air Force Base, Chase has worked tirelessly to help fellow Veterans and their supporters to heal from their own NDE experiences.

IANDS is the informational and networking center in the field of near-death studies, the first organization in the world devoted to exploring near-death and similar experiences. Members are researchers, laypeople, academics, and caregivers; experiencers and non-experiencers; professionals and the general public; from every continent but the Antarctic.

Corcoran Consulting aims to create public awareness and education about soldiers, Veterans, and NDEs. The company also focuses on the need for an effective remedy to close the ‘gap of care’ for injured soldiers who have experienced and NDE, by providing confidential, timely, and non-judgemental comfort and support at their bedside.