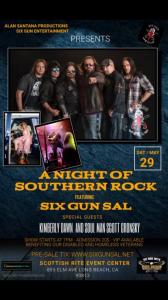 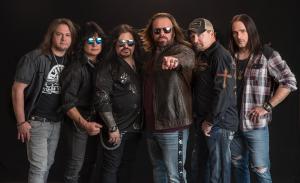 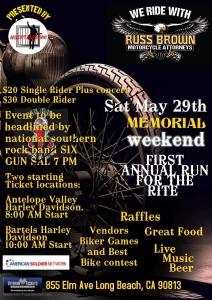 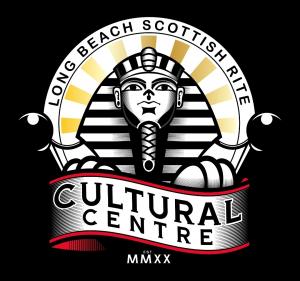 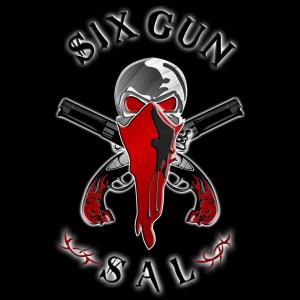 “The Memorial Day show is important to me because I respect and admire our veterans, especially those who gave their lives in defense of this country.”
— Anthony Appello, Six Gun Sal vocalist

The day kicks off at one of three Harley-Davidson locations in SoCal (Antelope Valley at 8 a.m., Harbor City at 9 a.m, or Los Angeles at 10 a.m.). From there, bikers head to the Long Beach Scottish Rite Cultural Centre for food, beer, live local music, a raffle of a gorgeous Michael Kelly Guitar, games, and more. The fest opens at 11:30 a.m. with the National Anthem and a Salute to our American Soldiers. The day culminates in A Night of Southern Rock, featuring Six Gun Sal (Southern Rock), country artist Kimberly Dawn, and Scott Gronsky (Soul Bluegrass).

“The Memorial Day show is important to me because I respect and admire our veterans, especially those who gave their lives in defense of this country. It is the ultimate sacrifice to ensure that we have the freedom that we always enjoy today. My father, my uncles, my grandfathers, everyone served in my family, so I want to go out there and put on a show so I can give something back to the veteran community and raise some funds for American Soldier Network,” Anthony Appello, Six Gun Sal vocalist, said.

“I’m thrilled to perform alongside such great talent for a good cause. There’s no better way I could spend my birthday and Memorial Day weekend than doing something I love for these fantastic nonprofits,” country singer Kimberly Dawn mentions.

“We’re excited to host this incredible event raising money for veterans after a year of being unable to host any live events at all. We’ve got a lot of activities planned from morning to night so there should be something for everyone,” said Donald A Joe, Long Beach Scottish Rite Cultural Centre.

All-day festival tickets are available through Eventbrite starting at $20 and include A Night of Southern Rock Concert. A portion of ticket sales benefits disabled and homeless veterans. Tickets for the bike run are available via Eventbrite at $20 for a single rider or $30 for double riders.

###
About Six Gun Sal
Six Gun Sal is an L.A-based Southern Rock Band whose edgy, biker style is heard through epic anthems and ballads. Since forming in 2015, Six Gun Sal has played hundreds of shows throughout the Western U.S. and put out two full-length albums. They’ve also released world-class videos for singles including “Remember My Name,” “Red Blooded American,” and “The Life,” which won two California Music Video Awards. In 2021, Six Gun Sal will embark on a U.S. tour to promote their latest album produced by Timothy Eaton (Greg Allman, Lynyrd Skynyrd).

About Country Singer Kimberly Dawn
Kimberly Dawn is a Canadian-born singer-songwriter who began taking piano and guitar lessons after the birth of her fourth child. She now focuses on creating inspiring music in the genre that has always spoken to her. She’s currently back in the studio writing and recording new music to release later this year, and will perform in Nashville this summer. Notable singles include “Slow Dancin’ in the Dark,” “Cadillac Lovers,” and “The Bottle.”
Watch Kimberly’s newly released music video, “The Bottle.”

About Soul Bluegrass Scott Gronsky
Scott Gronsky’s music is an eclectic fusion of sounds grounded in the values of blues, funk, jazz, and bluegrass and influenced by artists including Doc Watson, Derek Trucks, and Bob Marley. Gronsky’s original songwriting and lyrics tell stories and share compelling thoughts on “a life of love, heartbreak, the state of the world, the state of my mind, and other random experiences that connect us all together.” Gronsky is based in Orange County.