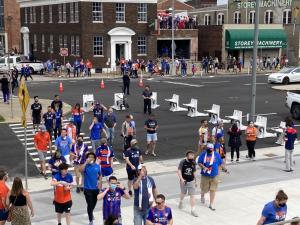 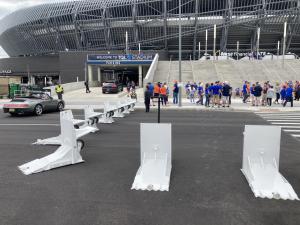 Fans gather safely in front of the new TQL Stadium. 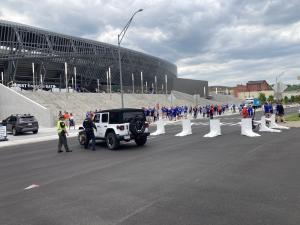 This being the first game at our new TQL Stadium, it was of paramount importance to keep our fans safe and having the Meridian barriers there ensured that certainly happened.”
— Dan Lolli, FC Cincinnati VP

CINCINNATI, OH, US, May 25, 2021 /EINPresswire.com/ — A new soccer stadium for FC Cincinnati debuted a new look and that included increased security for fans courtesy of Meridian Rapid Defense Group.

Supporters arriving at TQL Stadium were protected at the entry points by Meridian’s popular Archer 1200 barriers which allowed them to gather and pass safely without the threat of vehicles entering the newly created pedestrian area.

“This being the first game at our new TQL Stadium, it was of paramount importance to keep our fans safe and having the Meridian barriers there ensured that certainly happened,” said Dan Lolli, FC Cincinnati’s Vice President, Facilities & Stadium General Manager.

Before the game, Meridian’s fully certified deployment team worked with the club to prepare a vehicle safety mitigation plan.

“The safety of fans attending large crowd events can be a real problem for companies and event organizers if the right plans aren’t put into place from the very beginning. Cars moving close to large sporting crowds could be a recipe for disaster,” said Peter Whitford, Meridian’s CEO.

At TQL Stadium more than 20 Archer barriers were wheeled quickly into place which created several road closures. The individual mobile barriers, each made of 700 lbs. of USA steel, were set so the fans were protected while at the same time, close by, players and officials could still drive into the stadium parking garage.

The Archer barriers replace the need for the larger, unsightly concrete or water barriers. Instead of being confronted with a concrete barrier and the need to walk around it, the Archer barriers placed four feet apart allowed for a free flow of foot traffic in and out of the stadium.

“Once the barriers were in place it was great to see how the fans could easily and safely walk into the stadium without worrying about the usual problem of vehicles getting in their way,” said Mr. Lolli.

After the match the barriers, which can be moved by one person, were quickly taken away and traffic flowed once more around the stadium within the hour.

Meridian’s CEO Peter Whitford explained that the company has expanded rapidly into the sports stadium business. “We have our barriers now protecting professional sports fans across the United States, Canada and Australia,” said Mr. Whitford.

“At the 2019 Super Bowl, the Archer barriers created several secure zones for the tens of thousands of spectators heading to the stadium. We also have barriers at the Texas Rangers, Chicago White Sox, Colorado Rockies, Tampa Bay Rays, Cincinnati Bengals and New York Yankees to name a few and also deploy every year at the Rose Bowl game in Pasadena.”