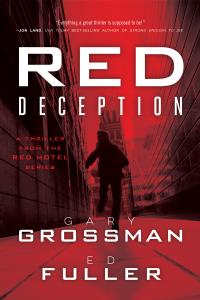 Red Deception – A thriller from the Red Hotel Series 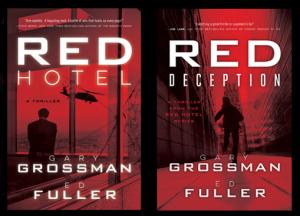 RED HOTEL is a cutting-edge story about very real targets all around us. A real-world drama that doesn't just suggest what might happen but is telling us what is beginning to happen now! A must read!”
— Peter Greenberg, CBS News Travel Editor

Blending the experiences of his long career in the international tourism industry, having retired after 40 years with Marriott Lodging, the last 22 as President & Managing Director of Marriott International, and his first-hand knowledge of global politics, Ed Fuller partnered with acclaimed author, Gary Grossman to captivate readers once again as they draw a chilling portrait of the fragile fault lines in Europe and the players poised to seize power.

When terrorists bomb bridges across the country and threaten the Hoover Dam, the vulnerability of America’s infrastructure becomes a matter of national security. Once again, Dan Reilly, a former U.S. Army intelligence officer, predicted the attacks in a secret State Department report written years earlier – a virtual blueprint for disaster, that was somehow leaked and is now in the hands of foreign operatives.

Washington is distracted by domestic crises as Russian President Nicolai Gorshkov sends troops to the borders of Ukraine and Latvia, ready to reclaim what he feels is Russia’s rightful territory. Tensions in Europe threaten to boil over as a besieged American president balances multiple crises that threaten to upend the geopolitical order. With the U.S. at the mercy of an egomaniacal leader, and reporters and covert agents on his tail, Reilly may be the one man who can connect the dots before an even bigger catastrophe unfolds.

To learn more about RED DECEPTION, RED HOTEL, the authors, news, and events, go to redhotelseries.com

RECENT REVIEWS
“RED HOTEL is a cutting-edge story about very real targets all around us. A real-world drama that doesn't just suggest what might happen but is telling us what is beginning to happen right now! A must read!”
Peter Greenberg
CBS News Travel Editor

“RED DECEPTION provides an in-depth and realistic ground level view of the type of asymmetric Nation-state sponsored threats faced by the Agencies tasked with protecting the United States both domestically and abroad. Thoroughly researched with thrilling pacing, it follows a worst-case scenario with the resulting fallout and a complex investigation that unfolds all over the Globe.”
Edward Bradstreet
Special Agent- Department of Homeland Security
Homeland Security Investigations (HSI)

“With their novel, Red Hotel, acclaimed journalist and thriller writer Gary Grossman and international hotel executive and Army combat veteran Ed Fuller showed how the world we live in has changed. Red Deception, takes the genre to another level, demonstrating how a true-to-life thriller can deliver vital information over even what the news media provides. Besides keeping us on the edge of our seats, Red Deception is so prescient, filled with deep insights into the real worlds of espionage and politics, while giving us a window that sheds light onto the darkest aspects of political intrigue and human nature.”
Barry Kibrick
Host of national PBS series, “Between the Lines”

ABOUT ED FULLER edwinfuller.com is CEO of Laguna Strategic Advisors, a global consortium providing business consulting services worldwide. He has served on business and charitable boards during his 40-year career with Marriott International where he was chief marketing officer followed by 22 years as president and managing director of Marriott International. Under his management, the international division grew from 16 to 550 hotels in 73 countries with 80,000 associates and sales of $8 billion. Upon retirement, Fuller has served on five university boards and taught as adjunct professor for MBA and undergraduate students. He has blogged for Forbes and other tourism and lodging industry media. His book, You Can't Lead with Your Feet on the Desk, has been printed in English, Japanese and Chinese. Fuller served as captain in the U.S. Army, stationed in Germany and Vietnam and received the Bronze Star and the Army Commendation medals. He and Gary Grossman are co-authors of the Red Hotel series, including the 2018 thriller Red Hotel and the 2021 release, Red Deception, soon to be followed by Red Chaos.

ABOUT GARY GROSSMAN garygrossman.com is a journalist, newspaper columnist, documentary television producer, reporter, media historian and the author of Executive Actions, Executive Treason, Executive Command, and Executive Force. In addition to the bestselling Executive series, Grossman wrote the international award-winning Old Earth, a geological thriller. With Ed Fuller, Grossman has collaborated on the globe-hopping Red Hotel series. Grossman has contributed to the New York Times and the Boston Globe, and was a columnist for the Boston Herald American. He covered presidential campaigns for WBZ-TV in Boston. He is a multiple Emmy winner for series and specials for networks including NBC, CNN, ABC, CBS, Fox, History Channel, Discovery, and National Geographic Channel. He served as chair of the Government Affairs Committee for the Caucus for Producers, Writers and Directors, and is a member of the International Thriller Writers Association and Military Writers Society of America. He is a trustee at Emerson College and serves on the Boston University Metropolitan College Advisory Board. Grossman has taught at Emerson College, Boston University, USC, and currently teaches at Loyola Marymount University.

Red Deception the 2nd Thriller in the Red Hotel Series