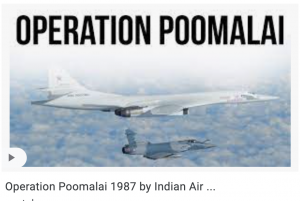 Tamils want to name the next food drop by India “Operation Eagle 2” or "Operation Poomalai 2."

Tamils are suffering without enough food due to the Sinhalese military occupation, Chinese incursion, and Covid-19 lock down. Because of the economic crisis on the island, prices are extremely high.”
— Tamils for Biden

NEW YORK, UNITED STATES, July 29, 2021 /EINPresswire.com/ — Tamils in the Tamil homeland in the north-east of Sri Lanka are desperately hoping for another intervention like 1987’s “Operation Eagle” also known as "Operation Poomalai" to feed starving Tamils. These suffering people are scared to call for the help of India due to Sri Lanka’s oppressive terrorism law.

Tamils want to name the next food drop by India “Operation Eagle 2.”

One Tamil man said that India should realize that Tamils urgently need outside help to survive. Every Indian diplomat in Jaffna knows it very well. He said that all Tamils are wondering why India is waiting. It is the time to arrive with food supplies for the Tamils. He said the Sinhalese will be taken care of by the Colombo government and China, but so far no one has come to the Tamils’ assistance.

Tamils do not have any economy. Their cultivated lands were seized by the Sri Lankan army and Tamil farm workers were replaced by workers from the Sinhala south. Especially in Vanni, the economy is farming. Along the coastal area the economy is fishing, which is now controlled by the Sri Lankan navy or by the Chinese, as is sea cucumber farming. Only Sinhalese fishermen are allowed to fish. It makes it difficult for Tamil fishermen to subsist at all. This has all occurred with the collusion of fishery minister Douglas Devananda, a Tamil in name but a Sinhala lover.

The Covid-19 lockdown forced daily wage-earners to stay home without any income. These people are suffering tremendously.

There is no freedom. Even hunting is monitored by the Sinhale army. Tamils are scared to go hunting. Owning a gun is prosecuted by Sri Lanka’s draconian Prevention of Terrorism Act (PTA).

Most of the produce from Tamil homeland has been taken to Sinhala south by the Sri Lankan army.

Tamils are suffering without enough food due to the Sinhalese military occupation, the Chinese incursion, and the Covid-19 lock down. Because of the economic crisis on the island, prices are extremely high. Tamils cannot afford to buy any food items.

Tamils in Tamil homeland are praying that India will once again airdrop food supplies as it did during Operation Eagle in 1987.