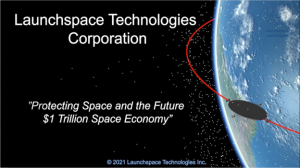 “I believe the traction we have seen in the market comes from our strong partnership with Airbus and our collaboration with NASA”, said Launchspace CEO, John Bauman.”
— John Bauman

BOCA RATON, FLORIDA, UNITED STATES, October 1, 2021 /EINPresswire.com/ — Launchspace Technologies Corporation is pleased to announce that its innovative solution for orbital debris remediation and enhanced spacecraft shielding will be space qualified on the Airbus Bartolomeo external platform on the International Space Station (ISS). The Center for the Advancement of Science in Space (CASIS), manager of ISS National Lab, under a cooperative agreement with NASA, has awarded Launchspace a grant towards the on-orbit utilization of Bartolomeo. In addition, Launchspace is working with the NASA Glenn Research Center under a Space Act Agreement for the design, manufacture and testing of advanced materials that will be part of the company’s patented orbital debris remediation solution.

“I believe the traction we have seen in the market comes from our strong partnership with Airbus and our collaboration with NASA”, said Launchspace CEO, John Bauman. “Launchspace will use the Bartolomeo platform to test our technology for orbital debris remediation and enhanced spacecraft shielding by capturing small orbital debris and mitigating the creation of additional smaller and dangerous orbital debris.”

The Launchspace ISS payload consists of small orbital ‘Debris Impact Pads’, which house a series of sensors that record the impact, force and orbital location of orbital debris that impacts on the ISS. Launchspace plans to put on orbit their orbital debris remediation solution after their work on the ISS
with Airbus.

“Combined with our planned sensor spacecraft solution, we believe we have a comprehensive solution for spaceflight safety to detect and track orbital debris, active satellites and threats from adversaries against our country’s space-based national security assets. These problems threaten the global space economy, which in 2019 was $420 billion and is forecast by the Department of Commerce to grow to an annual $1 trillion,” added Bauman.

Now, Walker, who founded moonWalker Associates in 2019, has joined the Launchspace Technologies board. “Removal of orbital debris is one the most vital of space missions. Billions of dollars could be made doing debris remediation and Launchspace’s technology with their NASA Space Act Agreement and planned ISS deployment is at the forefront of this opportunity.”

To learn more about Launchspace, please visit their website: