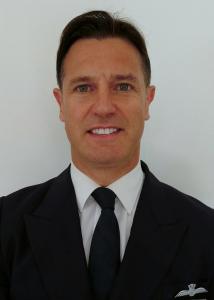 We are fortunate to have someone with Andy’s extensive background and experience as we move forward in earnest with the commercialization of Skyworks’ various aircraft platforms”
— Barry Jones, Skyworks’ Director of Aviation Operations and Chief Pilot

“We are fortunate to have someone with Andy’s extensive background and experience as we move forward in earnest with the commercialization of Skyworks’ various aircraft platforms,” said Barry Jones.

Andy’s aviation career covers a broad spectrum as both a military and commercial pilot operating across the globe. His military career saw him transition from the UK armored tank force to the British Army Air Corps, embarking on a very successful 16-year career in military aviation.

Andy specialized in support of UK special forces operations, as well as the air mobility of UK forces and saw active service in Northern Ireland and Afghanistan.

He was selected to attend the prestigious Test Pilots Course run by the world-renowned Empire Test Pilots School, based at RAF Boscombe Down. After graduating, he served as a Test Pilot during an intense period of procurement of rotary wing capabilities by the United Kingdom. He was also involved in the development of a wide variety of Western and Eastern European platforms of which highlights included extensive trials work on the UK Apache attack helicopter and the Russian Mi17 transport helicopter.

After leaving the military, he chose to pursue a career in commercial fixed wing operations, where he flew business jets, provided air warfare training to specialized military units, and then subsequently piloted the 737 and 787 Dreamliner on medium and long-haul commercial routes. He also fulfilled several key roles in aviation management and has operated/or possesses type ratings on more than 34 rotary and fixed wing platforms. His impressive background in Flight Test and Evaluation brings tremendous value to the Skyworks team.

“I am extremely excited to be part of the Skyworks team as together, we continue to transform the potential of this outstanding technology into tangible reality,” said Andy.

Skyworks Aeronautics is the world leader in the science and technology of gyronautics, focusing on the design and development of high-performance gyroplanes. Skyworks gyroplanes provide more affordable, safer, and higher performance alternatives for runway-independent aircraft.

Skyworks has more than 40 patents with several more underway, all obtained in an effort to radically change not only the way gyroplanes are perceived, but also the way they are utilized. From mass personnel transportation, agriculture, defense, and border protection to changing the economies of developing nations, Skyworks' goal is to change the nature of vertical flight. For more information about the company, its products, and individual members of the Skyworks team, visit www.skyworks-aero.com