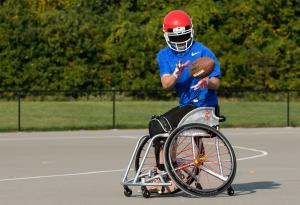 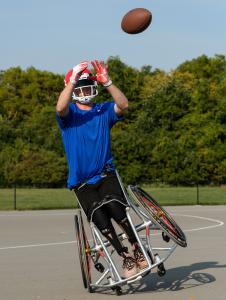 USA Wheelchair Football Player Goes Up For A Catch

More than 150 athletes, including more than 50 veterans with disabilities, will travel from 9 cities to compete in the tournament. The Kansas City Chiefs wheelchair football team will be defending its title on home turf after taking home the trophy in the first-ever USA Wheelchair Football League tournament last month in Phoenix.

Competition will kick off on Friday morning, September 29 at 9:00 AM with two fields running concurrently from 10:00 AM-6:00 PM on Friday and Saturday in Lot N at Arrowhead Stadium. A champion will be crowned Saturday night under the lights. Bobby Bell, a member of the Pro Football Hall of Fame who helped Kansas City win Super Bowl IV, is slated to attend and serve as an honorary coach during the Championship Game.

The USAWFL is made possible thanks to generous support from the NFL-Bob Woodruff Foundation Salute to Service partnership “Healthy Lifestyles and Creating Community” grant. In addition to supporting the USAWFL’s competitive teams, the grant provides opportunities for grassroots growth of the sport through coaching education and learn-to-play clinics.

More information about the league and opportunities to get involved can be found at usawfl.org.