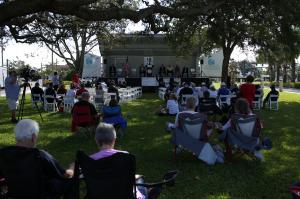 The Florida Veterans Memorial Plaza that stands today in Crest Lake Park was inaugurated on May 29, 2016 after staunch support from community members and groups, including the Church of Scientology.

The Veterans Alliance of Clearwater’s 17th annual event paid respects to those who gave some and some who gave all.

Part of bringing the community together means paying respect where it is due and it is far overdue for some of our local veterans.”
— Pat Harney, Church of Scientology Flag Service Organization

CLEARWATER, FLORIDA, USA, November 16, 2021 /EINPresswire.com/ — “We are here to show our patriotism,” said Robby Groover, president of the Veterans Alliance of Clearwater, in his opening speech on November 11. The date marks the nonprofit’s 17th annual Veterans Day event. “We are here to support our veteran community, that of the past and the present. That is our mission.”

One nonprofit that the Veterans Alliance works with is Tampa Homeless Outreach. They work together to assist homeless veterans in navigating resources available to them in Hillsborough and Pinellas Counties, with the goal of getting them into permanent housing. “We have a roundtable of all these veterans organizations that have these fantastic resources in order to push those services to the veterans that need them,” said Groover.

After a prayer led by Clearwater Police Chaplain Father Ted Costello and a rendition of the national anthem, mayor Frank Hibbard introduced the City Council. “If you remember last year it wasn’t quite like this,” said Hibbard of the rain during last year’s event and the presence of former City Manager Bill Horne. Horne, a colonel in the United States Air Force, passed away earlier this year a few weeks shy of his planned retirement. “We would be remiss not to acknowledge his service,” said Hibbard. Now addressing the veterans in the crowd from the Korean War, the Vietnam War, the Gulf War, Desert Storm and Desert Shield, Hibbard said, “We will not forget the sacrifice you have made.”

The Florida Veterans Memorial Plaza that stands today in Crest Lake Park was inaugurated on May 29, 2016 after staunch support from community members and groups, including the Church of Scientology. When it appeared private fundraising efforts would fall short, the community pulled together. That community effort triggered the City of Clearwater to make a matching grant of $150,000 in April 2015 to complete the project. Bill Hutton, Korean War veteran and co-founder of the Clearwater Veterans Alliance, conceived of the idea for a memorial in 2013. Members of the public can still purchase plaques to honor loved ones and support the alliance on their website.

“Part of bringing the community together means paying respect where it is due and it is far overdue for some of our local veterans,” said Pat Harney, public relations director for the Church of Scientology in Clearwater. “L. Ron Hubbard, our founder, was a lieutenant in the Navy during World War II, and suffered life threatening injuries. Just as we thank him for his service, the Church of Scientology gives a heartfelt thank you for the service of all veterans in Clearwater.”

After a final word from Groover to close out the event, guests enjoyed live music, exchanged ideas on how to better service local veterans and visited the booths of local nonprofits and organizations that advocate and support the cause.

About the Veterans Alliance of Clearwater:

Given that there are over 9,000 veterans in Clearwater, and an untold number of deceased veterans, the Veterans Alliance of Clearwater formed a memorial foundation to give long overdue tribute to this area’s history and assumed responsibility to create, fund and develop the Florida Veterans Memorial Plaza at Crest Lake Park. To donate a plaque to honor a veteran, to volunteer, or to contribute to the completion of the Memorial Plaza, visit tampabayveteransalliance.org.